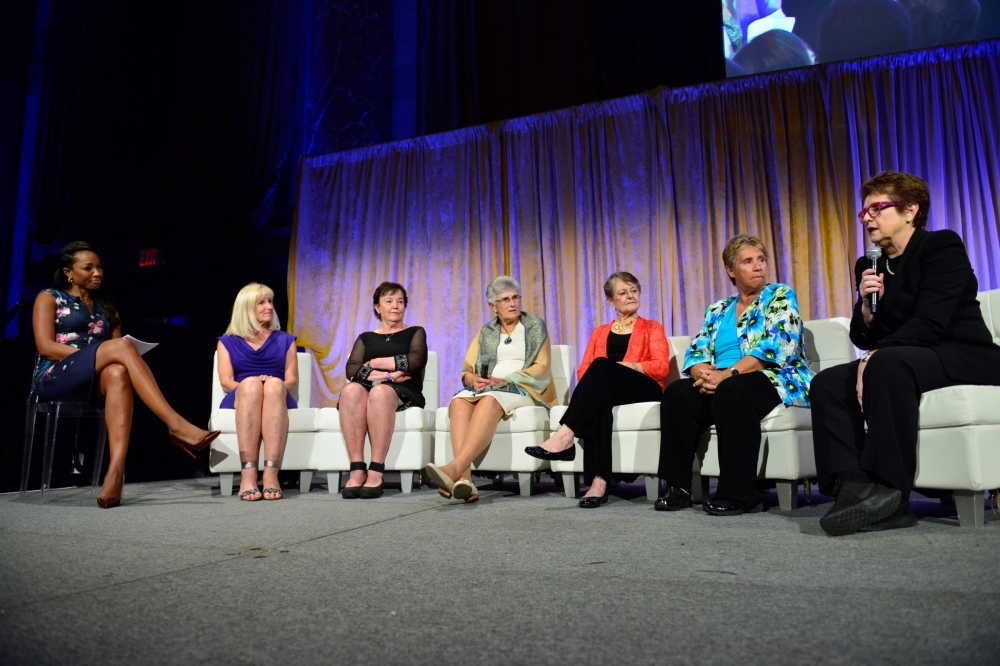 At the US Open, the USTA celebrated the Original 9, who signed $1 contracts in 1970 to start the Virginia Slims Tour, the first such women’s professional tennis tour. Today it’s emerged as the Woman’s Tennis Association, which has become the most powerful women’s sports league/tour in the world.

In the video below, Rosie Casals recalls the early days of Open tennis and the conflict that lead to the Original 9 breaking away, with great risks to their careers, to start something their own so they can rightfully earn what they deserve.

Casals, whose family comes from San Salvador, spoke to Ginn & Topics as part of its special presentation for National Hispanic Heritage Month, which runs from Sept. 15 to Oct. 15.

September 12, 2015 – Billie Jean King (left) and Rosie Casals pose together at The Tennis Hall of Fame Legends Ball at Cipriani in New York,

It is the chemistry between Billie Jean King and Rosie Casals that made them a legendary duo.

Together, King and Casals, a San Francisco native whose family came from El Salvador, won seven major titles, including five at Wimbledon.

But their chemistry went beyond the tennis court. King and Casals helped spearhead a group of nine women players who helped start the professional women’s tennis tour, which has evolved today into the Women’s Tennis Association (WTA).

For National Hispanic Heritage Month, Casals talks about what made her and King so special.

During a conversation about how corporate sponsor Virginia Slims (a cigarette product from Philip Morris) advanced the cause of women’s tennis in the 1970s and why other women’s sports failed to similarly grow, Rosie Casals couldn’t contain her frustrations.

And her target was female CEOs.

“I wish more women who are in a place of power, CEOs of companies, hell they should be helping women’s sports, and women. and they don’t,” Casals said, pounding her fist on a table.

Casals would single out IBM president and CEO Ginni Rometty. In 2012, Rometty took over at IBM and traditionally the head of the computer giant would become a member at the famed Augusta National Golf Club, the site of The Masters.

However, Augusta National had never had women members. When Rometty took over IBM, it brought attention to Augusta National’s policy. But Rometty wouldn’t be extended her invitation until last year to become the third woman to join Augusta National after former U.S. secretary of state Condoleezza Rice and Darla Moore.

Casals felt Rometty should have turned her attention to supporting the LPGA and closing the gap between men and women when it comes to prize money. The first major on the LPGA Tour, the ANA Inspiration in Rancho Mirage, pays its winner $375,000. The winner of The Masters, the first major on the PGA Tour, earns $1.44 million.

In tennis, the men and women earn equal prize money at all four of its major championships, including this week’s US Open.

Tennis is the only sport where men and women are equal in terms of prize money and status.

When Casals and Billie Jean King and a group of women they called the Original 9 started professional tennis for women, they were upset about the pay disparity. In 1970, men were paid six times more than women, and one event was to pay the men 12 times more than the women, which upset King and Casals

The nine players signed $1 contracts to start the Virginia Slims Tour, despite threats that they would be banned from playing in the Grand Slam events.

Casals would win that very first tournament in Houston.

However, tennis is an exception. And that frustrates Casals.

Despite the success of women’s college basketball and the US National Team in soccer, the opportunities in professional sports are well behind the men.

But there is a growing number of women who are taking over major corporations, such as Oracle, Yahoo!, Pepsi, Xerox, Lockheed Martin, Hewlett-Packard, General Dynamics and General Motors.

Casals would like to see some of those corporate dollars help promote women’s sports and provide more opportunities.

“That is what really pisses me off, when women don’t help other women when they are in a position of power,” Casals said. “I need to see that, more women stepping up to the plate. We have a lot of catching up to do.” 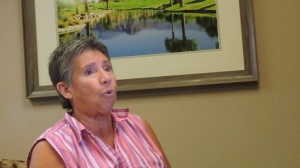 Serena Williams talks to the media during the BNP Paribas Open in March, 2015.

The latest It celebrity couple is now Serena Williams and the hip hop artist Drake.

For weeks, Williams and Drake were trying to play down anything was going on with them. And Williams even used the dreaded F word to describe Drake — friend.

Then they were caught making out in a restaurant by TMZ.

Williams is about to embark on a historic achievement in her Hall of Fame career. With a US Open victory, she will complete the Grand Slam, or winning tennis’ four major titles in the same season.

This year, Williams has been incredibly dominant. She played through sickness in her toughest major, the French Open, and still won the title.

The US Open is Williams’ best major. If she doesn’t win, guess who might get the blame.

It’s not as if Williams wasn’t going to get enough media attention in Flushing Meadows when the US Open begins next Monday. Now that she’s dating Drake, there will be even more attention on her. Will it be enough to derail her bid? Drake better hope not.

Blaming a tennis player’s significant other is not unusual. Remember when Brooke Shields dated and then married Andre Agassi? In 1997, Agassi’s career hit a low point as he dropped to 141 in the world. About the time Agassi and Shields finally called it quits, Agassi had a career revival, starting with his 1999 French Open title to complete the career Grand Slam. Agassi would then become the No. 1 ranked player at the end of the year to snap Pete Sampras’ streak of six consecutive years as the top-ranked player.

It’s not fair, and it might not even be accurate to say Shields was Agassi’s downfall. But that comes with the territory and it can be a terrible distraction.

Probably the first time many people heard of 18-year-old Belinda Bencic was last week when she upset No. 1 Serena Williams in the semifinals of the Rogers Cup in Toronto.

Some of the ESPN talk shows thought it was more about Williams and she wouldn’t be so fortunate if they meet again at the US Open.

They might be right, but they shouldn’t write off Bencic without knowing something about her.

Bencic made a splash in March, when she upset former No. 1 Caroline Wozniacki 6-4, 6-4 to reach the fourth round of the BNP Paribas Open. Wozniacki had reached the US Open final six months earlier. What made the victory even more impressive is that Wozniacki had double-bageled her in Istanbul in their previous meeting.

What was impressive about Bencic is she didn’t lead a 6-0, 6-0 loss derail her. She’s continued to rise. Now she’s No. 12 and could go up even higher by the US Open.

Here’s a look back at the story I wrote for the BNP Paribas Open website on Bencic. http://www.bnpparibasopen.com/en/media-and-news/news/2015/03/16/bencic-upsets-wozniacki

At the Rogers Cup, Bencic had to defeat six top-25 players to win the title: No. 25 Eugenie Bouchard in the first round, No. 5 Wozniacki in the second, No. 24 Sabine Lisicki in the third round, No. 6 Ana Ivanovic in the fourth round and then No. 3 Simona Halep in the final.

Last year, Bencic reached the quarterfinals of the US Open, which helped her win the WTA Newcomer of the Year award.

A Swiss player, Bencic is getting help from Melanie Molitor, the mother of Martina Hingis. And the Swiss players are having quite a year. Timea Bacsinszky has had quite a comeback year this season.

But Bencic has proven she is the future of the WTA. The way she’s playing, the future could be now.