Five-time world champion Timothy Bradley announced Saturday he will retire from boxing, turning a page in his life that brought him international fame.

“Thank you for cheering me on when I didn’t deserve it, loving me most when I needed it and for being my heartbeat to keep going day after day. I am the man I am today because of you all,” Bradley said in a release.

Bradley’s full release is below.

There always comes a point in life where we have to make choices that no matter how much we know the right option, it still leaves us filled with mixed emotions.

I have spent the past couple days trying to find the right words to describe this point in my life and no matter how long I sit and reflect, I still don’t know if these words can do my thoughts justice, but I’m going to do my best to open up my heart and share with all of you during this pivotal time.

It is no secret that a life of any professional athlete is not an easy one- yes it comes with a lot of fame and fortune but also comes with fear and fatigue. A balance that has to be achieved by ambition and maintained through perspective. For over twenty three years, Boxing gave me purpose and it defined me. Dedicated to my craft and fueled by my passion for the sport, my love for my team and my admiration for all of you who supported me day in and day out– I was able to give 100% of myself to be the best and to always get up when I was knocked down. It was the biggest challenge in my life but I embraced the sacrifice with every victory and milestone reached. Boxing gave me roots, it kept me off the streets, it gave me confidence, it taught me how to be a man and face every challenge head on and take the good with the bad. Yes I missed holidays, birthdays, even missed hearing some of my children’s first words but more than time, it took my blood, sweat and tears, all things I can never get back. Which is why turning the page for me is bittersweet. That once in a lifetime purpose to wake up everyday and give 100% is now fueled towards something else- my family. I find my strength in them, my peace and most importantly, unconditional love. I wake up wanting to spend all my time being a father, being a husband and being free. Although that square circle I lived to dance in everyday gave me so many smiles and blessings, it could never out weigh the smiles and blessings I receive from my wife and children. It’s now my turn to support them and encourage them to live their dreams and I couldn’t be more excited for this next chapter. I hope to continue to allow boxing in my world through teaching, commentating and being a fan of a sport I love so dearly.

And to you, the diehard fans, man, it’s been one heck of a ride. The bumps, the bruises, the peaks, the valleys, the days I didn’t want to get out of bed and the nights I couldn’t sleep….So many occasions where my heart, mind and soul were tested but with every challenge there was hope and there was all of you…giving me the courage to fight another day and do what I loved to do. I can never find the words to convey how much I appreciate all of you and how truly humbled I am by the unconditional support the past 23 years, Thank you. Thank you for cheering me on when I didn’t deserve it, loving me most when I needed it and for being my heartbeat to keep going day after day. I am the man I am today because of you all.

This blog is done as sort of a public service announcement for people attending the BNP Paribas Open. If you are out and about and think you see American tennis star Jack Sock, don’t assume it’s him.

He has a resemblance to Queens of the Stone Age lead guitarist and singer Josh Homme, who was also grew up in nearby Palm Desert.

I had covered Sock a little more closely the last few years, and only hit me at this year’s tournament his resemblance. So I was wondering if he ever got that.

“I don’t know who that is, and I hope that’s a compliment,” Sock joked.

So for the tennis fans who follow this blog, here’s a little background on Josh Homme:

He was originally in the band Kyuss before starting Queens of the Stone Age in 1997.

Their third album, 2002’s “Songs for the Deaf,” featured Foo Fighters front man and former Nirvana drummer Dave Grohl. The album produced the hits “No One Knows” and “Go With The Flow.”

Their hit song “Little Sister,” from their fourth album, “Lullabies to Paralyze,” features a driving cow bell. It helped inspire a classic moment on Saturday Night Live in 2005 with Will Ferrell.

Six of their albums have been nominated for Grammys.

In 2009, Homme was part of the super band Them Crooked Vultures, that also featured John Paul Jones of Led Zeppelin and Grohl. Their hit “New Fang” won a Grammy for best hard rock performance.

The year Roger Federer is having, his preseason goals seem ridiculously low as a return to No. 1 seems possible

For more on Jack Sock, read my blog on his quarterfinal victory over Kei Nishikori at the BNP Paribas Open.

These will be the diamond in the rough acts.

They might not be high on the lineup, although I could be wrong with that on some, but they will be well worth going to Coachella during likely the hottest time of the day.

Much like Queens of the Stone Age, they guys are a local product from Palm Desert. Unlike QOTSA, EODM has not played Coachella yet.

I felt promoters Goldenvoice missed an opportunity last year to bring the hometown boys to the festival, and maybe even have a benefit to help those who were affected by the Paris shootings last year at the Bataclan.

But most of all, Eagles of Death Metal is a fun band that plays timeless rock music, with a wink and a smile.

They’ve been a personal favorite and surprised they haven’t played Coachella yet.

Shine A Light is one of those ear-worm songs, and Banners had a nice run in 2016. Maybe they should have been in Coachella last year.

Incredibly fun music that’s catchy. These guys might be my favorite band from the last year or two.

Asa Taccone has a unique and expressive voice that brings their super hit “This Head I Hold” to life. I thought they would have played around when their debut “Mondo” in 2012. That didn’t happen, but now they have new music. Taccone’s brother Jorma is part of “Lonely Island.”

This band is very talented and very versatile, as they changed its sound. They are a fun act live and would do well at Coachella.

I might be picking these guys solely for a catchy hook in this song. But they do have a great sound.

An indie darling, these guys seem overdue to play Coachella.

I would suspect that would not be too far down the lineup.

The 80-year old director and producer have created entertainment that are a part of the American fabric.

He’s also been a star maker, introducing the likes of Julia Roberts, Robin Williams and Anne Hathaway to the world.

So here’s a look at some of his best work.

A woman who can be purchased for $3,000 a week became the ultimate Cinderella story and it made Julia Roberts the most iconic female actress of this generation.

Roberts would later  an Oscar and have a storied career, but she will always be known for Pretty Woman, her breakout role. Same could be said for Richard Gere, although he was well-known for American Gigolo. Something about those escort movies.

Hard to believe it’s been over 25 years. Here’s their reunion on the Today Show.

Arguable the most popular television show of the 70s and The Fonz was the biggest star in the world. Aaayyy.

This show also created the term “jumping the shark,” indicating when a popular show lost its way. On Happy Days, it started when The Fonz jumped over a tank full of sharks.

But the show also introduced several stars, including Robin Williams, who played the space alien Mork from Ork.

Robin Williams was so good on Happy Days that ABC created Mork and Mindy, another iconic show that Marshall wrote and produced.

It was a favorite for me as a kid. Sad to think of the show after the passing of Williams.

Here’s a look at a reunion Williams and Pam Dawber had a few years ago.

This 2001 movie would introduce the world to a 16-year-old Anne Hathaway.

It about an awkward teen who learns she’s the princess of a European country. Ironically, life imitated art in the Palm Springs area, when Prince Albert of Monaco had a daughter who lived in Palm Desert in 2006. The real life story paralleled the plot of Princess Diaries.

The show starred Marshall’s sister Penny, who became an acclaimed filmmaker herself.

Here is the iconic opening credit.

I grew up with reruns of The Odd Couple. Just because I grew up to be Felix Unger, it doesn’t mean it had an influence on my life.

OK, maybe it did.

The show is adapted from the Neil Simon play.

The origin of screenwriter John McNamara getting involved with the biopic “Trumbo,” started with a meeting with the writer of the Oscar-winning film “Roman Holiday,” when he was a film student.

But as McNamara was complementing Ian McLellan Hunter, who won the Oscar, he got a reply he didn’t expect. “I didn’t write “Roman Holiday.”

The real writer was Dalton Trumbo, the top screenwriter in the 40s and 50s. But Trumbo was also part of the Hollywood Ten, a group of writers and filmmakers who were blacklisted when they refused to answer questions from the House Un-American Activities Committee (HUAC).

Trumbo had to write screenplays under alias. Another one of Trumbo’s screenplays, “The Brave Ones” also won an Academy Award, but it was under the name of Robert Rich.

The Q&A took place on Nov. 15 at Cinemas Palme D’Or in Palm Desert, Calif., where Cranston is a part owner. 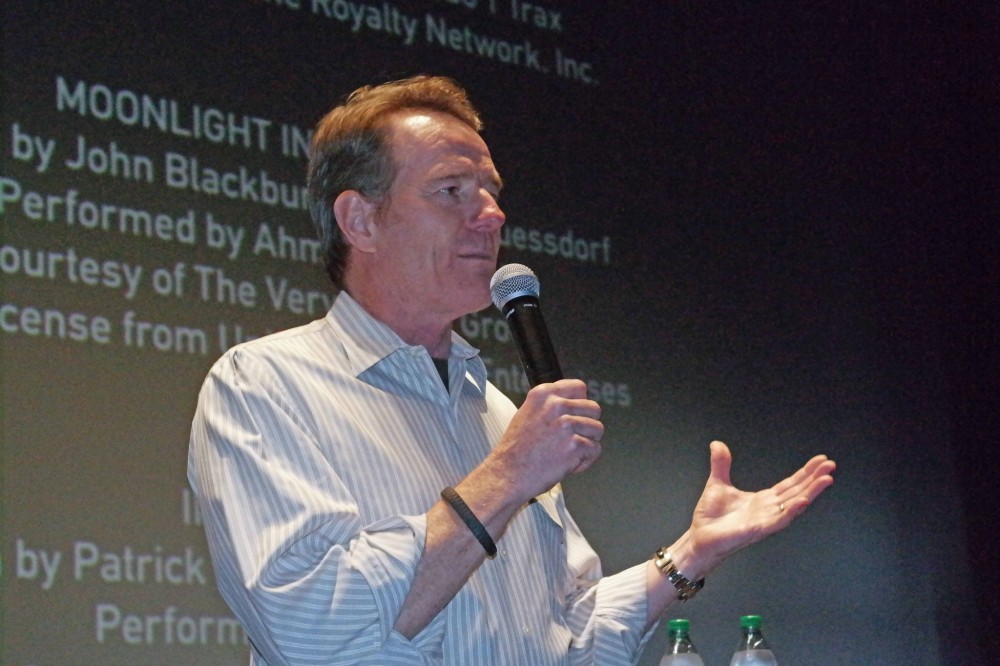