That kid happened to be Andre Agassi.

Agassi did well in the first round, beating John Austin, setting up a matchup against then No. 1 Mats Wilander.

Prior to the match, Wilander came into Pasarell’s office to ask what he knew about Agassi.

Pasarell didn’t know much, but suggest Wilander avoid his forehand.

When Pasarell went to watch the match, Wilander hit every shot to Agassi’s forehand, and won in dominating fashion, which Pasarell jokes about.

“Well that’s how much I know about the game of tennis,” Pasarell said laughing.

Because Agassi was an amateur, he couldn’t accept prize money. But Pasarell said made sure Agassi was properly compensated.

Agassi had put in his expenses as $300, but the prize money for reaching the second round was $1,000.

But Pasarell said he looked at Agassi’s expenses and thought there were things that were off, and made his corrections.

The story was later told differently by Agassi in his autobiography, “Open.”

Below is the full video of Pasarell talking about Agassi at the BNP Paribas Open. 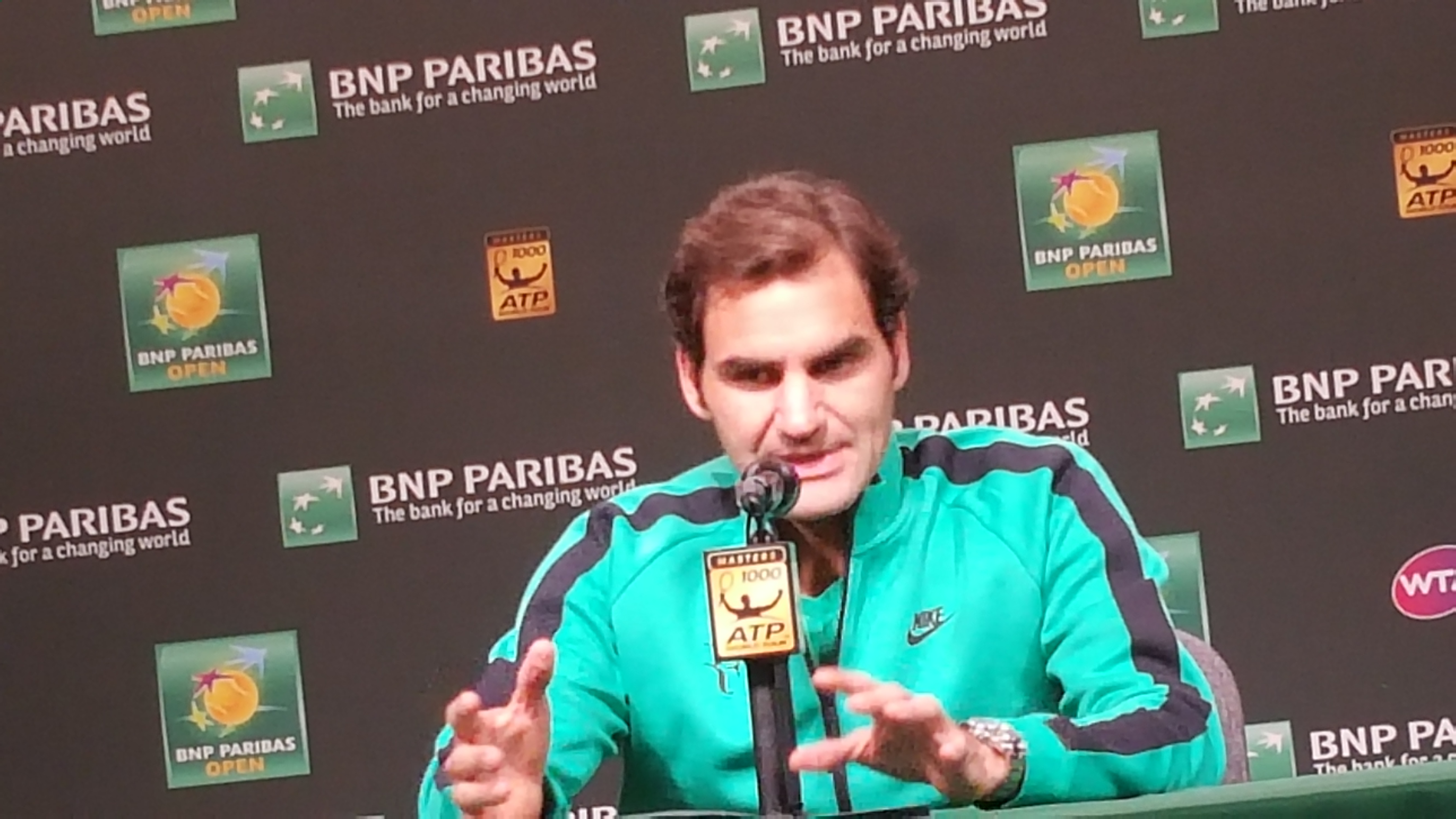 Sometimes it takes asking a questions others wouldn’t where you will get an interesting and unexpected answer.

On Sunday at the BNP Paribas Open, Ben Jorgensen, a 13-year-old from Rancho Palos Verdes, asked Roger Federer if his Australian Open title, a record 18th Grand Slam championship, was his most special.

When it comes to comparison questions, players usually try to dance around it and not really answer the question. That wasn’t the case Sunday.

Federer ranked his victory over Rafael Nadal in February as one of his top five. And he listed other titles with out prodding.

“I don’t know if it beats my first one, because the first one, it was a dream come true, so that maybe beats everything,” Federer said of his straight sets win over Mark Philippoussis in the 2003 Wimbledon final.

“French Open, I chased that one. And then when it did happen, it was unbelievable what it meant to me and the support I got in Paris,” Federer said of beating Robin Soderling in 2009 for his only French Open title.

“I don’t know. Winning at the US Open against (Andre) Agassi, one of my big and best performance potentially, winning in that atmosphere, under that pressure, being World No. 1 and defending against him, who maybe people thought he was going to retire if he won,” Federer said of his 2005 title, which was his sixth.

“This one now after the comeback and the injury, it was by far the biggest surprise. It was more surprising than, say, my first one in ’03. But, yeah, every one is special. This one is right up there,” Federer said of his Australian Open title.

Jorgensen said he and his mother Christine were spending the day in Indian Wells, and he was at the Tennis Garden for 14 hours watching matches and asking questions in the press conferences all day.

In the late 80s and throughout the 90s, Pete Sampras and Andre Agassi were the top stars in tennis and formed one of the sports’ legendary rivalries.

What both had in common was they launched their pro careers at the BNP Paribas Open.

First, Agassi got his break thanks to a phone call from Pancho Gonzales. Pasarell, trusting his idol, gave Agassi the wildcard, sight unseen.

During that debut, Agassi would have to play No. 1 Mats Wilander. Pasarell gave Wilander some advice on how to play the teenager, which he totally disregarded.

Unlike Agassi, Pasarell got a chance to watch Sampras play. Sampras lost in a qualifier, but Pasarell liked what he saw, so he gave him a wildcard.

Serena Williams talks to the media during the BNP Paribas Open in March, 2015.

The latest It celebrity couple is now Serena Williams and the hip hop artist Drake.

For weeks, Williams and Drake were trying to play down anything was going on with them. And Williams even used the dreaded F word to describe Drake — friend.

Then they were caught making out in a restaurant by TMZ.

Williams is about to embark on a historic achievement in her Hall of Fame career. With a US Open victory, she will complete the Grand Slam, or winning tennis’ four major titles in the same season.

This year, Williams has been incredibly dominant. She played through sickness in her toughest major, the French Open, and still won the title.

The US Open is Williams’ best major. If she doesn’t win, guess who might get the blame.

It’s not as if Williams wasn’t going to get enough media attention in Flushing Meadows when the US Open begins next Monday. Now that she’s dating Drake, there will be even more attention on her. Will it be enough to derail her bid? Drake better hope not.

Blaming a tennis player’s significant other is not unusual. Remember when Brooke Shields dated and then married Andre Agassi? In 1997, Agassi’s career hit a low point as he dropped to 141 in the world. About the time Agassi and Shields finally called it quits, Agassi had a career revival, starting with his 1999 French Open title to complete the career Grand Slam. Agassi would then become the No. 1 ranked player at the end of the year to snap Pete Sampras’ streak of six consecutive years as the top-ranked player.

It’s not fair, and it might not even be accurate to say Shields was Agassi’s downfall. But that comes with the territory and it can be a terrible distraction.