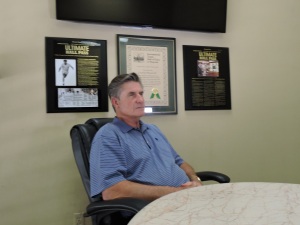 Charlie Pasarell said when he played the 41-year-old Pancho Gonzales in 1969, the plan was to keep the legendary player on the court as long as he could to take advantage of the 16-year age difference at Wimbledon.

The plan worked, but the result wasn’t what Pasarell hoped for.

The 25-year-old Pasarell, a native of Puerto Rico, came up short in a match that spanned five hours and 12 minutes and was contested over two days. The Mexican-American Gonzales rallied for a 22-24, 1-6, 16-14, 6-3, 11-9 victory that ranked among the greatest matches in Wimbledon history.

Pasarell grew up idolizing Gonzales and then was tutored by him during his UCLA days.

The 1969 match at Wimbledon was the only time Pasarell said he faced Gonzales, who was already inducted into the International Tennis Hall of Fame a year earlier.

Pasarell was sharing his story and career as part of a Ginn & Topics special series for National Hispanic Heritage Month, which runs from Sept. 15 through Oct. 15.